OVER 100,000 PEOPLE HAVE RECOVERED FROM CORONAVIRUS AROUND THE WORLD

More than 100,000 people have recovered from the novel coronavirus, according to the latest figures from Johns Hopkins University.

More cases of the COVID-19, which was first detected in China's Wuhan city of the Hubei province, have now been confirmed outside the country than within. China has more than 81,400 cases, while nearly 260,000 cases have been reported in nearly 166 other countries.

South Korea has also seen a large number of recoveries, with nearly a third of its infected population having recovered from the virus. Italy, despite having the largest number of confirmed cases outside China, has also seen recoveries than deaths since the outbreak began.

More than 70,000 people in China have recovered from the virus. Nearly 59,000 people in the Hubei province alone have recovered, while thousands more have in other parts of the country, including in the Guangdong province of southeast China, the eastern provinces of Henan and Zhejiang as well as Hunan in central China.

China claims the outbreak has largely been contained, with only one new domestic case reported on Sunday, its first in four days, Reuters reports. The country has managed to slow the spread of the virus following strict containment measures imposed at the onset of the outbreak in late January, including a major lockdown in Wuhan, which is home to nearly 11 million people.

However, China has seen a rise in imported cases. On Sunday, it reported 46 imported cases, 14 of which were in Shanghai, while 13 were in Beijing, the Chinese capital.

The country has introduced several measures to prevent another major spread of the virus, including directing all international flights bound for Beijing, its largest air traffic hub, to one of 12 other airports. Passengers will undergo health screenings at these airports before being allowed to fly to Beijing, Reuters reports.

South Korea, which has Asia's largest number of cases (nearly 8,900 confirmed infections), also seems to have managed to slow the spread of the virus.

To date, more than 3,100 people in South Korea have recovered from the virus. On Sunday, the country reported 64 new cases, its lowest number since the peak of the outbreak in the country about a month ago, Reuters reports.

The latest figure also marks the 12th consecutive day South Korea has reported less than 100 new cases, a dramatic drop compared with its peak figure of 909 new cases reported on February 29, according to the Korea Centers for Disease Control (KCDC).

The country has tested more than 316,000 people as of March 20, according to Statista, and increased testing is deemed to be a key component of its mitigation measures.

"We don't give much meaning to numbers yet, but as there are some fluctuations despite a declining trend, our top priority is to prevent sporadic group infections and repatriated cases", said Yoon Tae-ho, the director-general of public health policy for the country's health ministry.

Fourteen of the latest new cases in South Korea were reported to be imported cases. From Sunday, the government introduced tightened mitigation measures to prevent another spike in cases, including a mandatory quarantine for all travelers from Europe, the KCDC confirms.

A 15-day social distancing policy was imposed in the country from Sunday, including restrictions on religious and sports events as well as entertainment gatherings. Most religious venues have now been turned into online services, according to Yoon.

The majority of the cases in South Korea were linked to a religious group known as the Shincheonji, Church of Jesus, the Temple of the Tabernacle of the Testimony (SCJ). Several infected people were reported to be members of the group, which holds mass services with members sitting in close proximity for long periods of time.

The graphic below, provided by Statista, illustrates the recovery curve compared to the infection curve of the virus. 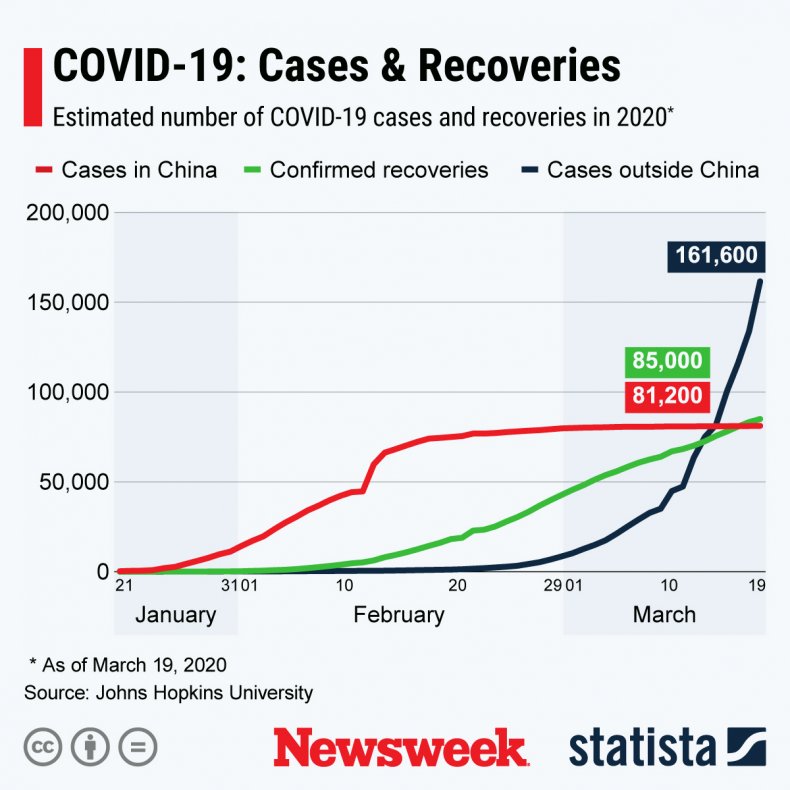 While Italy has reported nearly 5,400 deaths since the outbreak, the largest number in the world (surpassing China), it has also seen more than 7,000 people recover from infection.

The country has imposed strict lockdown measures across the country in a bid to help curb the spread of the virus which has affected more than 59,100.

In Vò, a small town just outside Venice northern Italy, where the country's first death was reported, rigorous testing was also believed to have played a key role in curtailing the spread.

Health authorities were reported to have tested and retested each of the town's nearly 3,300 inhabitants. Tests were done on everyone, whether they showed symptoms or not. Anyone who was found to be infected (as well as everyone they had come into contact with) was then put into quarantine.

Data on COVID-19 cases is from Johns Hopkins University unless otherwise stated.

The graphic below, provided by Statista, illustrates the spread of the COVID-19 virus across the world. 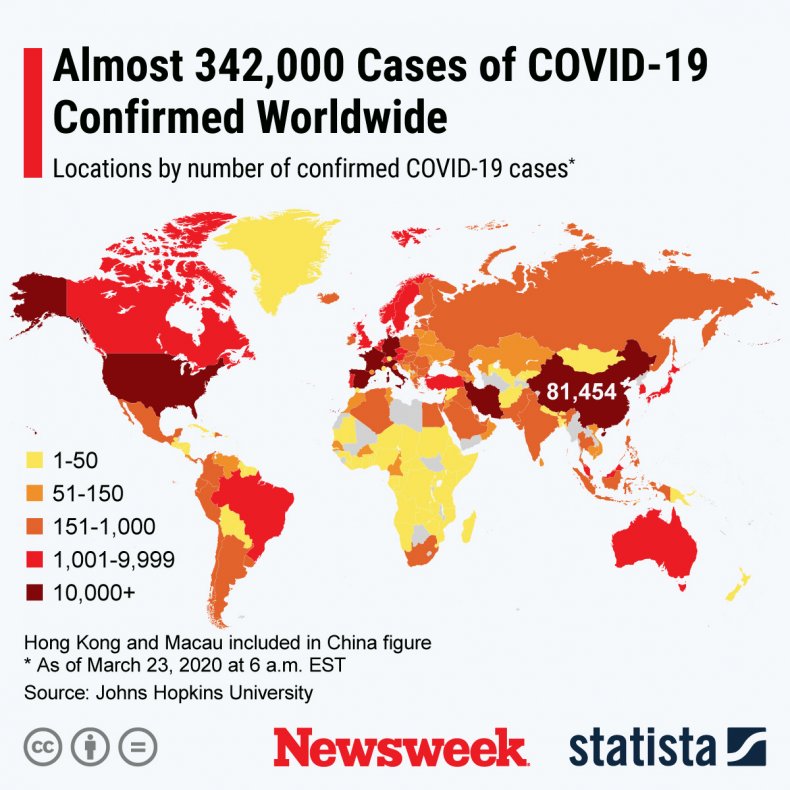 A map provided by Statista shows the number of confirmed COVID-19 coronavirus disease cases around the world as of March 23.